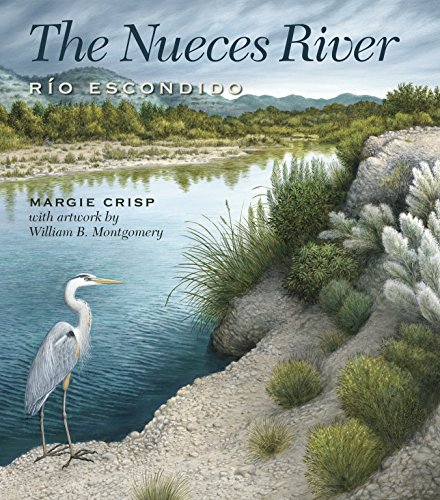 First appearing on early Spanish maps as the Río Escondido, or hidden river, and later named Río de las Nueces after the abundant pecan trees along its banks, the Nueces today is a stream of seeming contradictions: a river that runs above and below ground; a geographic reminder of a history both noble and egregious; and a spring-fed stream transformed into a salty, steep-sided channel. From its fresh, clear headwaters on the Edwards Plateau, Margie Crisp and William B. Montgomery follow the river through the mesquite and prickly pear of the South Texas Plains, to the river’s end in Nueces and Corpus Christi Bays on the Gulf of Mexico. With vivid prose and paintings, they record their travels as they explore the length of the river on foot, kayak, and fishing boat, ultimately weaving a vivid portrait of today’s Nueces. Capturing the river’s subtle beauty, abundant wildlife, diverse culture, and unique history of exploration, conflict, and settlement, they reveal the untold story of this enigmatic river with passion, humor, and reverence. To learn more about The Meadows Center for Water and the Environment, sponsors of this book's series, please click here.